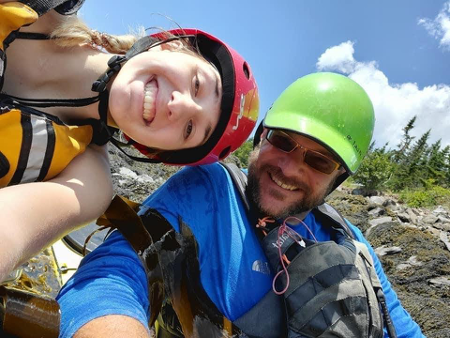 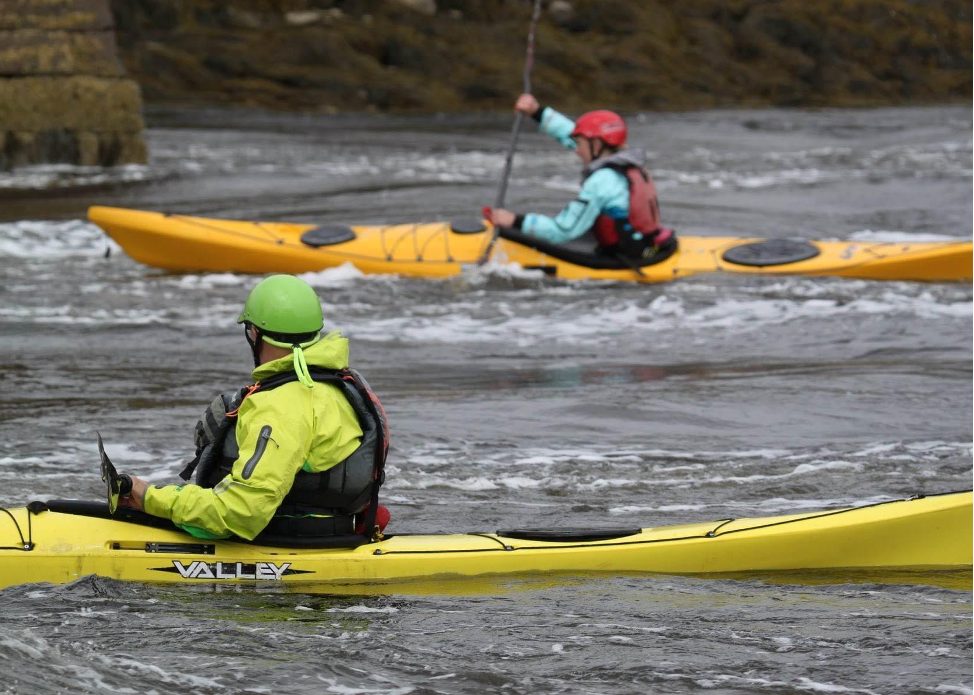 Fathers play such a large role in our lives, they support us through the ups and downs, teach us skills like how to ride our bike or change a tire, and while my father did teach me those things, more importantly, he taught me how to kayak.

Throughout my childhood I dabbled in many different sports. I played basketball, practiced highland dance, and even tried karate for a year. The sport that spoke to me the most was sea kayaking. 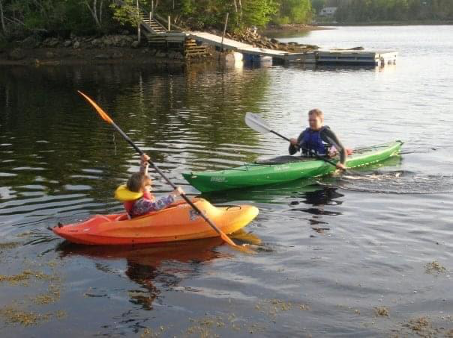 When I was five, my father heard about a kids’ night run by a sea kayak tour company (East Coast Outfitters) just down the road from our house. When he was younger, he had done some canoeing and kayaking through his Scout troop. Since he enjoyed it, he enrolled me in the kids program. That summer, every Wednesday we’d rush out the house far earlier than we needed to because we didn’t want to be late for kayaking. In following years, Dad started to lead the kids club and I continued to love my time out on the water. It was clear he’d taken to the sport. Instead of driving my brother to the preschool across the bay from where we lived, he adapted his kayak to carry a passenger and began kayaking my brother to preschool when weather permitted.

Kayaking became our family activity. We’d go surfing, practice rescues, go on camping trips all along, all while picking up new skills. When I was ten, I got my first kayak. From then on, whenever we wanted to kayak we’d head down our neighbour’s driveway to the bay and practice. Countless evenings we spent on the water practicing rolls and different strokes; all with my father coaching me.

It wasn’t just through his coaching that he supported me: whenever I needed a tow he’d offer his line, yell “Go, Go, Go!” from the sidelines when I tried to catch a wave, and reminded me to drink water on long journeys because he knew I would forget. He’d do all this and more because, while yes he was my coach, he also was my father. Taking care of me and pushing me to do my best is how he supports me.

Because we used kayaking to bond, my dad and I have countless beautiful memories from days on the water. One summer my family took a vacation to Newfoundland for two weeks. During those two weeks there were only five days we weren’t out on the water. One of my favourite kayaking memories is from this trip.

We started our day at our campground. After breakfast, we quickly packed up and headed off to Witless Bay. We had chosen to paddle in Witless Bay because of the ginormous puffin colony that lived on one of the islands. After about a half hour drive we pulled into the parking lot. As we were unloading our gear from the car I saw a spout of water rise up out in the bay. At first I thought it was some heavy fog but then I saw another. At this point I pulled Dad aside, pointed it out and, sure enough, we saw more spouts of water. He told me to be quiet and not show my mother. Our paddle to see puffins had turned into a paddle to see puffins and humpback whales. There was one downside; my mother is petrified of whales.

We got ready to launch, like everything was fine. While carrying our boats to the shore, my mother put two and two together however it was too late; we were all ready to hit the water. There was no turning back now.

The paddle out to the colony was smooth sailing. Puffins were scattered all over the water, and the whale spouts could be seen on the other side of the bay far away from us.  My mother was able to stay calm, sort of. It was easy because we were all laughing at the puffins. Puffins can only take off if they are flying into the wind. In addition, they’re prone to awkward landings. This means they end up doing a belly flop spin out, which is very entertaining to watch. My favourite was a puffin that skipped like a rock off of two waves and ended up being flipped by the third wave. After the third wave, it shook itself off very quickly, then whipped it’s head around as if checking to make sure no other puffin saw its awkward landing. 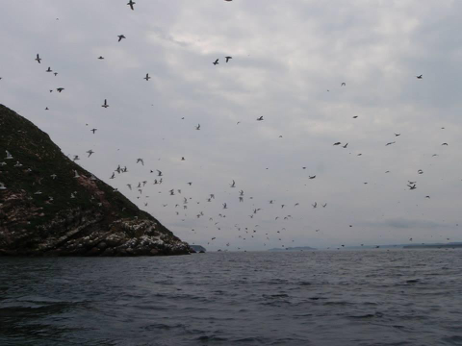 The paddle back from the colony made this my favourite paddling experience to this day. On the way back, we noticed that the whale pod was bubble netting the entire bay. This meant that they were swimming circles around the bay to trap fish to eat. Everywhere we looked we could see a whale spout if we waited ten seconds. It was so cool to witness this natural feeding tactic in person. As we paddled back, we realized we were going to have to traverse the circle the whales had created. This made my mom nervous since on the horizon some of the pod was breaching. But, the only way home was to paddle through.

When we were about to enter the circle, my father told my mother and I to paddle parallel to the circle in order to enter at the right spot. We did this for a bit but adjusted our angle as we observed my father to do so. My mother and I were behind him when we did this, but we figured the coast was clear since he was making the adjustment. We paddled forward for about ten seconds when the colour of the water about 15ft in front of me changed to this beautiful blue green. The coloured water began to rise and before I knew it I was staring a giant humpback whale in the eye. My mother and I both let out a scream and the whale slipped back under the water after catching its breath.

My father held in his “I told you so”.

While it was a terrifying experience in the moment, having that magical moment to connect with such a beautiful creature is something I’ll cherish forever. The rest of the paddle was easy and the whales even became more interactive with us. A calf swam beside us, with the mom following closely behind. The whales were singing and you could hear their song, and when we left their bubble net we had two whales wave us goodbye.

This magical family experience paddle would not have happened if my father hadn’t planned this adventure and as well as our initial times in sea kayaks, beginning our passion for being on the sea. Sorry Dad, it was scary but I don’t regret not listening to you on the water that day.

A Different Type of C-to-C

My father has been my best friend on the water since I began kayaking about 15 years ago. He taught me the basic skills I needed to get to the point where I am today and, while I may have a different coach now, I’ll always be his kayak partner. He helped get me to where I am today and I will continue to push myself to bring him pride.

Because of my father, I grew up being a part of the sea kayaking community in Nova Scotia. This led to me to be inspired to further develop my skills through Paddle Canada certifications and personal coaching. Achieving Level One coaching certification and joining Christopher Lockyer’s Committed to the Core Sea Kayak Coaching team, have been the highlights in my kayaking development. All made possible, because of my dad.

Over the years, I’ve noticed that the sea kayak community functions like a family does. We take care of each other, support each other, and push each other to become the best paddlers we can be. This was never more evident than in 2018 when my dad was diagnosed with a rare form of lung cancer which resulted in his left lung being removed. I was so touched by the supportive nature of the sea kayaking community. Since the initial diagnosis, our family has received endless support from the paddling community; drives, emotional support, and just being there for my dad, my brother and I. I truly cannot thank everyone enough.

The ol’ one lunger and I still get out on the water together. Even though he has one lung, he can still out paddle me if he really wants to.

With the pandemic, getting out on the water became more complicated. I live with my mother and he lives on his own. So for a while last year our kayaking had to be put on hold. Luckily, we were still able to salvage last season and make the most of it.

In March of this year we found out that his cancer had metastasized in his left frontal lobe meaning he would need to be treated yet again for cancer. He received his treatment and is now in recovery. The frontal lobe of our brain is responsible for personality traits and how a person acts but let me tell you, the tumor hasn’t changed a thing because he’s still as hungry as ever to get on the water.

At this point we don’t know what the future holds, but what I do know is that I love my father and we love kayaking. I also know there is endless support to be found in the kayaking community. 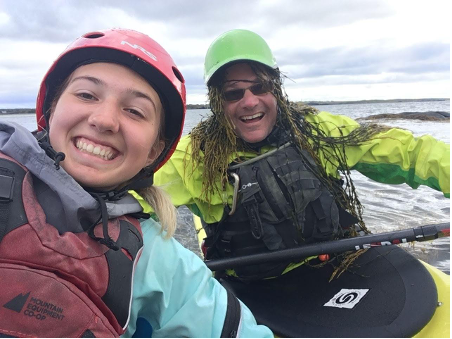 For Fathers in Kayaking

Happy Fathers Day first and foremost. Kayaking is challenging, but raising a kid is a whole different level of difficulty. So thank you to all the fathers who give up time on the water to spend time with their families.

I’d also like to give a special thanks to the people I like to call my “Kayak Dads”. These men are people who have heavily influenced me as a paddler and provided support and guidance when I needed it. So, Dwight, Daniel, Steve, Don, and Paul, thank you all so much for being there when I needed it. I’d also like to give a huge thanks to my coach and mentor Christopher Lockyer. A thank you isn’t enough to make up for the time you spend helping the kayak community. It’s truly inspiring how committed you are to your endeavors, you show what it means to be committed to the core.

And last but not least, Happy Fathers Day Dad. I am so grateful for everything you have shown me. Thank you for getting me involved in this sport from a young age. It has become my obsession the same way it is for you and I’m so glad we can share experiences on the sea. Words cannot describe how grateful I am to have you as my dad and no matter what you’ll always be my kayak partner. Go Team Dauphinee!! 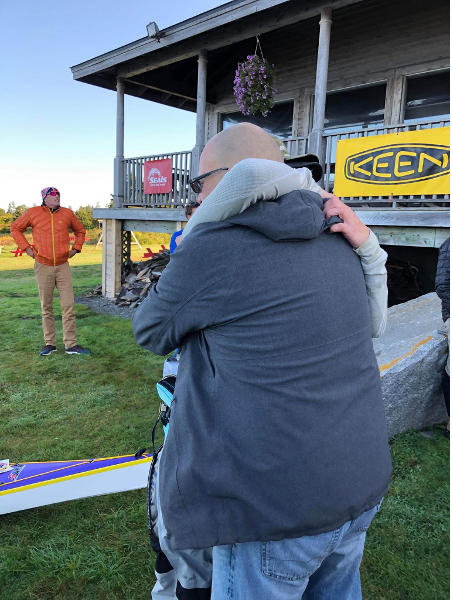 So, fathers who kayak, let me give you some advice. I know how hard it is to be away from your family when you’re on the water, so bring them with you. The little ones, the partner… heck, even bring the dog if you want! It is a great way to bond and, if you’re lucky, you may get to form the same connection my father and I have.